Something For The Pain an essay by Doc Span

I worked on G and H block passing out meds and holding sick call. Inmates could see me by filling out a form. A paramedic, just out of the Navy, I was hired to help improve conditions in the brownstone fortress. They were some walls, built to hold Chicago’s most notorious. Cook County Jail, on 26th and California, once detained Derringer and Capone in cells on my block. 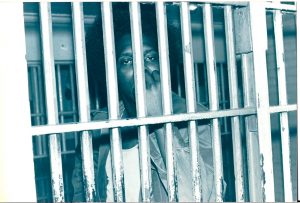 In 1972 the volume was up a notch. H block was so full that some slept in sheet hammocks hung from the bars. Accused killers, razor blade swallowers, psyche disorders, inmates with history, too dangerous to be in the population for more than one hour a day. They were all here. There were over 10,000 men in a space built for 5,000 and I was responsible for the health of a quarter of them. 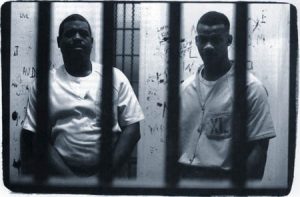 Tier by tier, I dispensed drugs, from my cart always in the acrid, permeating odour of disinfectant. It was a typical day in my white coat, on my toes, talking jive to the inmates, speeding on adrenalin, pumped and ready.

On the level 3 catwalk I checked a scribbled complaint form. It was from Ron Vasquez. A serial killer, Ron had a headache. He was in the insanity wing. ‘I need some aspirin’ Vasquez was screaming, bashing his head against the masonry wall. He’d been doing it over and over, all night long. In the next cell Clarence joined in, ‘He wants aspirin’.

Vasquez tried to distract me from the examination, listing his crimes, crying and moaning, manipulating me for more drugs. I tapped a few pills on to his palm. They came straight back in my face. ‘He’s tryin’ to kill me. He gave me poison’. ‘They were only painkillers, just like you wanted, man.’ He spat at me, swearing and flaying around. The situation escalated too quickly. ‘Get me out.’ I yelled to the gate. ‘Quick. Where’s the psychiatrist?’ I ran my cart to the old white mortar and red brick of my office. It was lit by a single forty watt bulb. It reminded me of the bulb Vasquez had tried to swallow. I pulled myself together and restocked my cart.

Back on my round the elevator clunked down a tier to the segregated transvestites in their perfumed cells with curtains and clothes lines, all of them in hats and make up, wrapping themselves around the bars and cooing. ‘Hi Doctor Bob, give me a valium, give me a laxative, give me something for the pain’. ‘The Thrill is Gone’ hummed from a homemade radio. Miming BB King ‘the ladies’ danced, draping boas around them. I grinned and forgot about Vasquez. Bb had just recently  performed in the yard.

Sometimes I played harmonica with the jail blues band. That afternoon we used the Chapel. A couple of tunes gave me the taste so I headed down to the west side to play with Willie Kent and the Beehives at Ma and Ross Bea’s on Sacramento and Madison. It was a treacherous neighbourhood, but I could park my old Ford at the front door. The Galaxie was safe. Most of the locals had seen the inside and they knew me. They remembered those extra tranquillizers. That night we played late, we played hard and we played great. 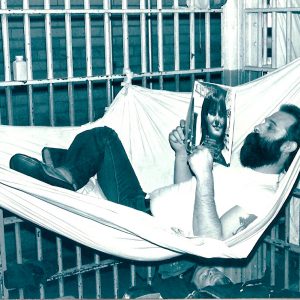 On Friday morning, feeling a little worn, I checked through front security, passed by the offices and the Chapel. I waved ‘Hi’ to Rev York, a lady Baptist minister. She was reading passages to prepare for the day. Rev York saved souls but she wasn’t in time for Vasquez’s. He was found in his cell hanging from the bars with a sheet tied around his neck.

Accompanied by the warden, medical officials and the duty officer I trudged along the catwalk with obscenities wailing from the cells , ‘You did it. You did it. You poisoned him. It was your fault Doc’. ‘Shut up Clarence or you’re in the hole,’ yelled back the duty officer. Clarence screamed, ‘I’m gonna kill you when I get on the street Doc’. There was Vasquez covered in the sheet that killed him. And all I could hear was the sound of squealing metal on a concrete floor as his stretcher was wheeled away… 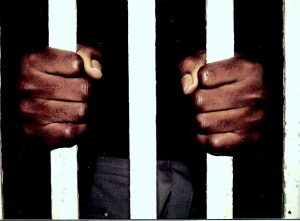 ‘Something’ For The Pain’ essay by Doc Span